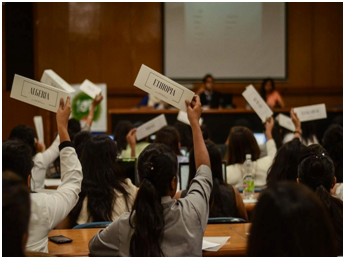 Technoliterati is the Literary Society of IGDTUW which aims at the amalgamation of creativity and talent in the students. It inspires young budding engineers to open their minds up and let their imagination fly, to write candidly, speak fluently and express freely. It encourages students to contribute articles for the college student magazine and actively participate in all the events that the society organizes.

At the beginning of every year, new core team members are recruited through the strenuous process of interviews. Presently the core team members are Shifa Samreen, Agamani Paul, Mahima Kaushik and Aishwarya. Apart from conducting regular events like Debates and Essay writing the society took some new initiatives like starting a Writing Club and Group Discussion Club. The Writing Club paved way for the society blog where members write and publish articles, stories, poems, monologues etc. among other forms of writing. The blog is also open to guest bloggers from outside the society. The Debate Club, ‘Eloquentia Verax’,initiated last year, continued to train students for Inter and Intra College debating events along with organizing debate competitions within the campus. The biggest achievement of the year for the society was that Technoliterati in association with Innerve’16 organized the first ever Model United Nations at IGDTUW with the Agenda for United Nations General Assembly-SOCHUM as: Contemporary forms of slavery in the 21st century with special emphasis on commercial sex work, child soldiers and bonded labourers. The event witnessed a participation of more than 100 students and turned out to be a huge success.