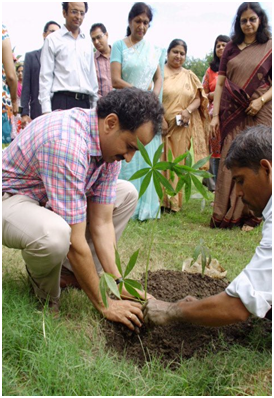 "Green sphere" is the Environmental Society, which was formed in October 2008. Currently Dr Bhavani Prasad Naik is the Faculty Advisor of this society. It aims at spreading environmental awareness and is an initiation by those who comprehend the engineering of ecological balance and the effect of our routine activities on our immediate environment.

The activities and events are organized that focus on creating awareness among students and encourage greener practices. Some of the initiatives taken by the society are: Sapling Distribution on Orientation Day every year to welcome the new students of the Institute, Poster Making Competition, Plantation Drive and Theme Photography Events.
Green sphere also organizes several events and awareness campaigns such as Anti Fire-cracker awareness program, Earth Hour signature campaign, thematic T-shirt painting and Video-making competitions , workshops and seminars conducted by NGOs like ICPE, WWF, TERI, CSE, Swechha and many more. In addition, the society has initiated implementing the activities of Swachh Bharat Mission in IGDTUW. This society works in collaboration with Department Of Environment, Govt. of NCT of Delhi.
The Greensphere society of IGDTUW has successfully installed a Paper Recycling Unit which is being run by the students quite effectively and efficiently. The unit makes quality paper out 46 of waste, which is used for making Greeting Cards, Invitations, Fest charts etc. The society is active on all major social media and can be contacted at: https://www.facebook.com/greensphereigdtuw and mail: greensphereigdtuw@gmail.com.

The Greensphere Team followed its tradition of welcoming the freshers with a plant sapling. On 5th August 2014, the day of orientation, a plant sapling was given to all the freshers outside the auditorium as token. About 100 saplings were distributed.
Various seminars and workshops have been organised by Greensphere throughout the year -‘Reducing Green Cover in Delhi’ by Plants Guardian Society, ‘E-Waste Management’ by Mr. Daman Dev Sood (IEEE Delhi Section), and ‘Organ Donation’ by Mohan Foundation. These seminars helped us to create awareness among students.
The Greensphere team participated in event, GreenX, organised by Technex (annual fest of IIT-BHU). Various awareness programs and cleanliness drive were organised during the event. Working models and projects like Bleach water bulb, mini biogas plant were made. A final presentation was given at IIT-BHU Campus. Our team came sixth all over India and were also awarded Green College Certificate.
Greensphere organised an online painting competition on the theme "Cleanliness for a better tomorrow"; a Group Discussion on the topic "How effective Swachh Bharat Abhiyan will be in India" and a quiz competition was also conducted during first week of October. These events witnessed participation in huge numbers. A cleanliness drive was also organized.
The paper recycling unit was set up at the IT block in college campus on 14 October 2014 by Greensphere. The demo of the machine was given by Mr Piyush Pant in presence of faculty members. The equipment for recycling is innovative, low cost and efficient whereas as the process for the same is simple, safe but sophisticated. The recycled paper has constantly been used for pledges, invitations for our cultural festival-Taarangana, making files, bags and pen stands.
A pledge was taken on 20-21st October 2014 to celebrate Diwali-festival of lights, in an environment friendly way ( Green Diwali). The pledge stated "This Diwali light the Earth with happiness and not by crackers". Paper recycled by the Greensphere members was used to make the pledge. The pledge was taken by Ms. Nupur Prakash (Vice Chancellor), faculty members, staff members and students of the university. The students were made aware of the harmful effects of the crackers and were motivated to celebrate eco-friendly Diwali.
The tacit efforts of the faculty members as well as the students of Eco-Club- GREENSPHERE of Indira Gandhi Delhi Technical for Women (IGDTUW) and Eco-Club-URVAR of Ambedkar institute of Advanced Communication Technologies &Research, Delhi (AIACT&R) under the aegis of Department of Environment, Govt. of Delhi, with the guidance of Dr.B C Sabata (Sr. Scientific Officer,Dept. of Environment), organized a one day environment awareness programme “CATHARSIS” on February 13th, 2015 with a backdrop of fun-learning events, witnessed participation and appreciation from colleges all over Delhi.

The inaugural began with a plantation drive by the eco-club faculty coordinators and members of the two colleges- Greensphere and Urvar in the IGDTUW grounds. To celebrate the spirit of the cause, events like poster making, ecofie, debate, best out of waste, run for a sapling, Environment quiz, Treasured Herbal Rangoli, Seminar on e-waste, etc were organised. Catharsis also witnessed prolific donations in terms of old clothes and e-waste from faculties and students. Saplings were also distributed among the participants and winners. Catharsis’ first phase accomplished the task of seeking everybody’s attention to mother Earth to revise our obligations for a greener and cleaner world.
Permanent metallic dustbins have been set up in the college campus by the Greensphere team. The dustbins have been installed near the canteen, outside GCR and in college grounds.
Separate markings have been done for biodegradable and non-biodegradable waste
On the occasion of Holi, festival of colours, an initiative was taken by the students of Greensphere to celebrate an Organic Holi on 3 March’15. Herbal colours made by specially –abled were distributed to all the faculty members and students; along with this a pledge was taken to celebrate clean and green Holi. Waste paper recycled by the students of Greensphere was utilized to make the pledge.
On 28th March’15 Earth hour was celebrated in college hostel wit h a candle light dinner to give the message ‘Save Electricity’.